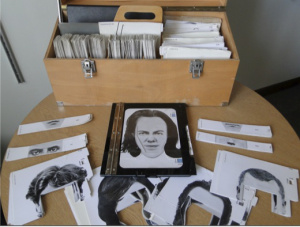 On Sunday night, the CBS show ‘Written in Blood’ includes material from our forensic psychology team. In this television series crime fiction authors explore the real life crimes which influenced them to write their novels. This episode focuses on “The Rotherham Shoe Rapist” and includes material on photofit psychology which our team helped them with.

If you’re interested in this topic, here’s a blog post from our Professor of Forensic Cognition, Graham Pike, to explain it further. This post was originally published over on Illuminations.

The Psychology of Photofit

Describing faces is difficult. Even describing the face of someone you know very well can be tricky. Try it if you don’t believe me! I’m betting that you can describe their hair fairly well, but really struggle for most of their features. Describing the face of someone you are not familiar with, saw briefly and sometime ago is extremely difficult indeed. Yet that is exactly what the police ask eyewitnesses to do. The descriptions of faces given by eyewitnesses tend to be very bad indeed, and are certainly unlikely to lead to someone recognising who is being described. Photofit, and other systems such as Identi-kit and E-FIT, attempt to overcome this problem by creating a visual, rather than verbal, description of the face of a suspect.

Unfortunately, the initial research that examined Photofit found that the images tended to be a poor likeness of the person being depicted, and suggested that this could either be because the system itself was not very good or that human memory for faces was just too inaccurate. Testing this was fairly simple, as all that needed to be done was to create some Photofits from memory and compare these to Photofits made with a picture of the target face present. This research found that being able to see a picture of the face did not improve the accuracy of the Photofits produced, suggesting that at least part of the problem lay with the system itself. One possibility was that Photofit simply did not contain sufficient numbers of facial features, but researchers also suggested that the way the system worked might be the problem. 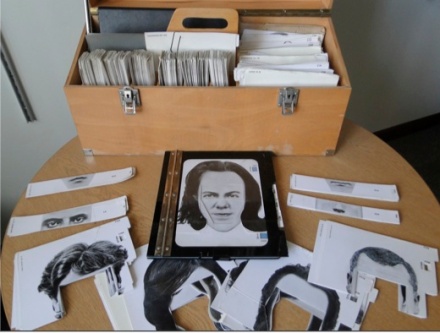 This was because Photofit consists of sets of individual facial features, taken from many different photographs of faces, that can be combined together to form new faces. However, our memories do not work in the same way. Psychologists researching face recognition have found that faces are stored in our memories ‘holistically’; in other words the brain does not divide a face into its individual features, but instead remembers the face as a whole.

Try picturing a face in your mind and then try ‘zooming’ in on the nose; you will find it extremely hard, if not impossible, to do. Asking witnesses to look through albums of, for example, noses means asking them to do something that the brain is just not set up to do. To discover just how difficult this task is, you can have a go at making a face using an online version of Photofit, called Photofit-Me (click here).

The E-FIT system was designed to overcome this problem. Although it still uses a database of individual facial features, these are always shown as part of a whole face. E-FIT is computerised, and allows the witness to change individual features as well as to move and resize them. This latter point is important, as face recognition research has found that the ‘configuration’ of facial features (the position of the features in relation to one another) is a key component of how the brain stores and recognises faces. E-FIT also contains a great deal more individual features than Photofit, making it more likely the witness will be able to find a feature that they think is a good match to the suspect.

Myself and colleagues (Nicola Brace and Richard Kemp) conducted a study to see if E-FIT was able to create accurate likenesses. The police ask a witness to make an E-FIT (or Photofit), so that the image can be shown to the public in the hope that someone recognises it and comes forward to suggest who it might be. This means that whilst the person creating the E-FIT may be unfamiliar with the suspect, the police hope it will be seen by someone who is familiar with them. To replicate this, we asked our participants to create an E-FIT of a celebrity. We then showed these celebrity E-FITs to a second group of participants, and asked them if they could name them. Half of the E-FITs were created from memory, and half with a picture of the celebrity present throughout the construction process. Eight of the E-FITs from this study have been reproduced below, can you work out who they are supposed to be? 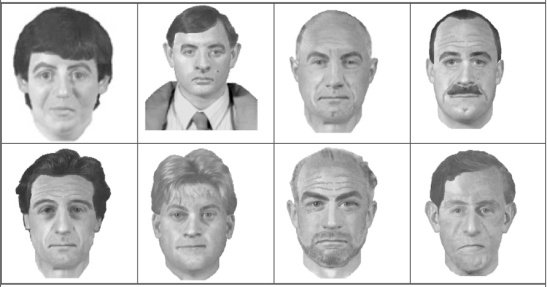 (answers at the bottom of the page)

We found that of the 96 E-FITs created, 64 were identified by at least one person, suggesting that about two-thirds of the images were fairly accurate – as in a police investigation it only takes one person to recognise the image and come forward. Unlike the previous research with Photofit, we found that allowing the witness to look at a picture of the person throughout construction did lead to better composites than those created from memory. This suggests that E-FIT is a significant improvement over Photofit.

In this study, some of the composites were created by an operator working with a witness, as would be the case in a police investigation, and some by the operator working alone. The images created by the operator alone were recognised more often than those created when working with a witness. This suggests that requiring the witness to verbally describe the face to the operator is problematic. Psychological research into how memory works suggests that the problem is that the face of the suspect is visual, but to create an E-FIT this visual memory needs to be turned into a verbal description and communicated verbally to someone else, before being turned into a visual image.

This problem led to the creation of the latest generation of facial composite systems, such as EFIT-V. These systems use an entirely visual interface, so that witnesses are not forced to verbally describe the face. In addition, although E-FIT still used a database of facial features, which is a poor match for how human memory works, EFIT-V works with the face as a whole, so is a much better fit with human cognition. To learn more about EFIT-V, visit this website.

Although the differences between Photofit and EFIT-V reflect the advances in technology made over the last 40 years, the most significant improvements have been in how later systems make use of psychological knowledge about human memory. Unfortunately, the task facing researchers trying to develop better systems is a very hard one indeed, as human memory for unfamiliar faces tends to be very bad. To explore this further and to see how accurate you would be as an eyewitness, have a look here.

If you want to see more from our forensic psychology team on your TV screens, check out  ‘The Detectives: Murder on The Streets’ on BBC2 on Sunday 20th Sept. Our Zoe Walkington advised on this show.